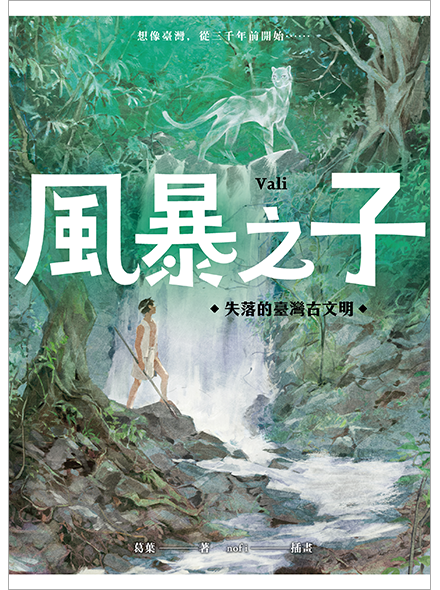 VALI: THE LOST STORY OF TAIWAN

* A cooperation work with National Museum of Prehistory of Taiwan

A young boy, starved and unconscious, washes up on the rocky shores of a village. Though his first words upon waking are in a foreign tongue, yet he claims to be the long-lost son of a village elder. Yet no one expects that this adopted “native son” will be the villagers’ key only hope against destruction.

Kuzuha’s breakout fantasy novel instills a page-turning story of resilience and community resistance with allegorical weight as the “adopted” child of a village must risk his life to combat environmentally destructive evil.

Although the hunting people of Hacying live beside the ocean, they fear it for its destructive power. Master hunter Yafo knows this well, having lost his grandson, Vali, to an ocean storm. When a young boy, starved and unconscious, washes up on the rocky shore in a dugout canoe, Yafo risks his life to save him. Imagine his surprise when this strange boy is found to be clutching his grandson’s jade pendant in his hand, and, after shouting his first words in a foreign language, later claims in Yafo’s own tongue to be the long-lost Vali.

Little does Yafo – or anyone else in the village – know that the boy who claims to be Vali will play a crucial role in the entire village’s fight against environmental destruction. A horde of the undead – the spirits of rapacious early colonizers – has awakened deep in the island, and now moves outward. They kill everything they touch. Only jadeite appears to stop them. Vali joins Yafo’s elite group of hunters in order to procure the jadeite and fresh water needed to ward off this creeping death – a decision that will require trust and sacrifice.

Novelist Kuzuha enriches this deeply engaging story with intensive research on Taiwanese archaeology and prehistoric ecology. This deeply localized world of Vali: The Lost Story of Taiwan grows around the reader like the tropical forests of Taiwan.