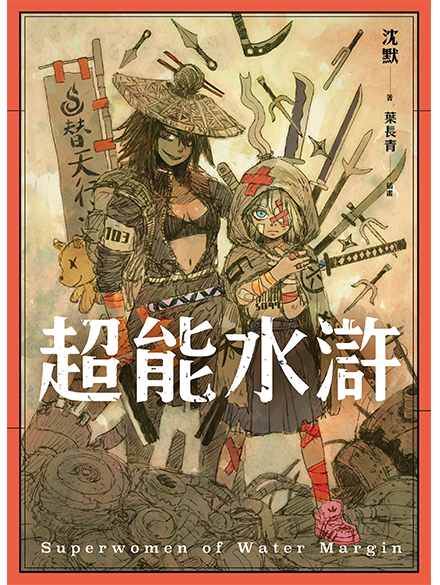 OUTLAWS OF THE TAIPEI MARSH

Post-apocalyptic Meta-Taipei is a dark city ruled by men and monsters. Fleeing forced breeding programs, a fourteen-year-old girl makes her way to a strange village beyond the city’s perimeter where she becomes the inheritor of mysterious powers. There she will take her stand with a band of super-powered heroines, fighting to eke out a better life in a world on the brink of collapse.

Post-apocalyptic Meta-Taipei is a dark city ruled by men and monsters, where women are reduced to serving men as vessels of reproduction. When a teenage girl flees the city with government soldiers in hot pursuit, she is rescued by two women who take her to a mysterious village. Populated by refugees from Meta-Taipei, the village is protected by 108 super-powered heroines, each with unique abilities. The teenage girl arrives on the day one of these super-powered defenders is dying, and is chosen to inherit the older woman’s powers, and also her name – Lin Chong.

Lin Chong’s first mission is to join a team that will raid a government warehouse in the city to restock village supplies. But their apparently successful raid unravels just as her team prepares to leave the city.…

Outlaws of the Taipei Marsh is based on Outlaws of the Marsh, the classic Chinese novel about 108 noble-minded outlaws (new recruit Lin Chong among them) who resist the oppression of a corrupt government from their hidden base in the marshlands. In this sci-fi update of one of China’s earliest novels, the setting shifts from Song dynasty China to post-apocalyptic Taipei, the outlaw heroes become super-powered heroines, and the marshland hideout becomes Treasure Hill, the idyllic artists’ commune on the outskirts of present-day Taipei.